Upward Enterprises Volunteers at the National Kidney Foundations Over the Edge event. 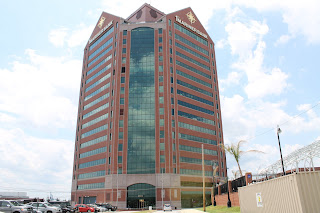 Its always nice when we can use our experience in the ropes course industry to help with a charitable cause.  We were contacted by the National Kidney Foundation who ask if we could help with their ‘Over the Edge’ event on June 18th.  The Over the Edge event, held at the Canton Crossing Tower in Baltimore, Maryland  offered  participants the opportunity to rappell down a 200ft (17 story) building to raise money for the foundation to fight kidney disease.

On June 18th, the day of the actual event, 56 participants took part and each rappelled down the building and altogether raised an amazing $82,244.00 for the charity.

Clive’s wife Liz also took part in the event and raised $1100 before she went over the edge in memory of her Father who passed away from kidney failure in 2005.

The view from the 17th floor balcony was quite breath taking, when you first walked out onto the balcony.  Best advise was to not look down too much before you rappelled.
Each of the participants were geared up with full body harnesses and helmets and went through a brief training on how to use the various equipment before being taken to the balcony for thier rappel.  Some people were a little nervous, but everyone made it to the bottom with no problems.

We were so pleased to be part of this fun and exciting event and look forward to helping out at next year’s event. For more information go the the National Kidney Foundations website.