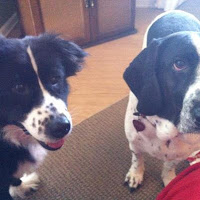 If you ever visited the Upward Enterprises office here you would be greeted by my two dogs, Jelly and Daisy. They usually keep me company as I work at my desk. You might have heard a bark in the background as we are talking on the phone together. That is them saying “hi”.

As I was contemplating what to write in this week’s blog, I looked down at Jelly sleeping behind my chair and thought that having a dog in the office has a calming effect. How does a dog’s presence in an office effect workers? I did a quick internet search and found an interesting study done in 2010 at Central Michigan University by Christopher Honts and Matthew Christensen that posed the question:

Could the presence of a canine in the workplace make people collaborate more effectively?

They experimented with two groups – one with dogs underfoot and one without. As it turned out, their preliminary findings did show that there was indeed a difference in the way the two groups functioned. The group of workers who had dogs around them to pet and socialize with, proved to be more cohesive and trusting of their fellow team member. Could it be that the bond one feels when interacting with a pet be transferable to humans around resulting in workers also bonding? Interesting.

Companies such as Google, Ben and Jerry’s and Proctor and Gamble’s pet food division, let you bring your dog to work. And many presidents of the United States have pet dogs in the Oval Office. So, I am not alone in my thinking that pets have a place on the team. They build a special bond among humans without even uttering a word.